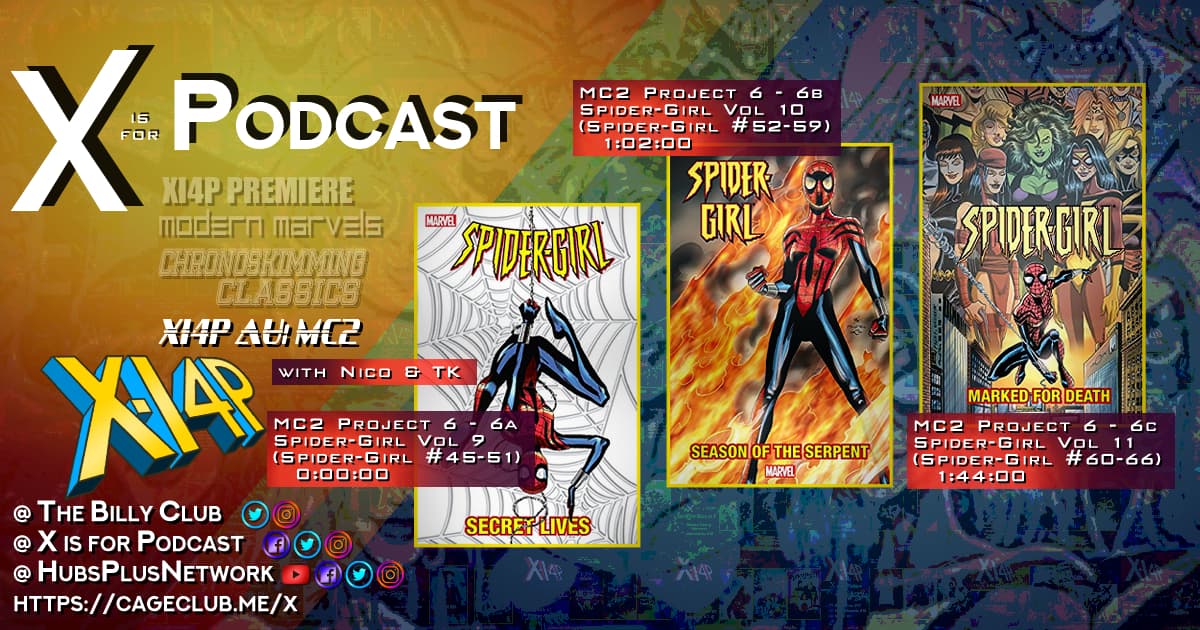 Spider-Girl grows up hard, goes arc-based, and the MC2 will never, ever be the same! After last episode’s first-ever Spider-Girl only look at the MC2 where Nico and TK saw the best and worst of Spider-Girl’s title, jump into the three best consecutive volumes of the MC2niverse yet. Allison Mongraine. Black Cat. Scarlet Spider. What do they all have in common? They’re all in this arc, running in parallel stories, forcing the Spider-Girl title we’ve known to transform into her next form. Then the team takes a look at the only issue of Spider-Girl so far not to be written by Tom DeFalco, which does not receive highest marks, despite Nico’s memories to the contrary from his youth in Spider-Girl volume 9. (0:00:00) Spider-Girl enters the Season Of The Serpent, a major six-part arc turning the world of Spider-Girl upside down and inside out – simultaneously changing the title to match the evolving comics medium while bringing back plots from literally 50 issues earlier (the second episode of MC2, XI4P 331). Seth presents the first truly compelling, difficult to defeat villain for Spider-Girl in sometime in volume 10. (1:02:00) Lastly, Spider-Girl continues her arc-based storytelling with Marked For Death, volume 11 of her solo title, bringing what must be a dozen storylines from her first 5 years to a conclusion, seemingly writing out no less than 3 major characters. With only one more Spider-Girl solo episode to go, the MC2 universe is in for some huge change. (1:44:00) All this and more from the new format of XI4P – we hope you survive the experience!