Time to Kill (1989): Examining the Problems of Adapting a Novel Into a Screenplay [Joey’s Review]

For (at least) the second time in #CageClub, TIME TO KILL is a movie with a screenplay adapted from a novel. Much like the other adaptation (BIRDY), Time to Kill has many issues that routinely pop up in adaptations. The biggest one of all is the inability to fill in the gaps between plot events and create reasonable expectations for why characters do the things they do.

Time to Kill takes place in Ethiopia in 1936. (Cagenection! It’s World War II time, just like it was in RACING WITH THE MOON.) For the second time in three movies, one of the film’s biggest conflicts centers around rape. Just as Peter Loew raped Alva in VAMPIRE’S KISS, Cage’s character in Time to Kill, 1st. Lt. Enrico Silvestri, rapes a native Ethiopian woman. It’s a horrible act of aggression performed by Silvestri, in a film where nothing else he ever does leads you to believe he’s capable of this level of violence. As uncomfortable as this sounds to write, Silvestri isn’t a bad guy; he’s just a guy who did a really, really, really bad thing. 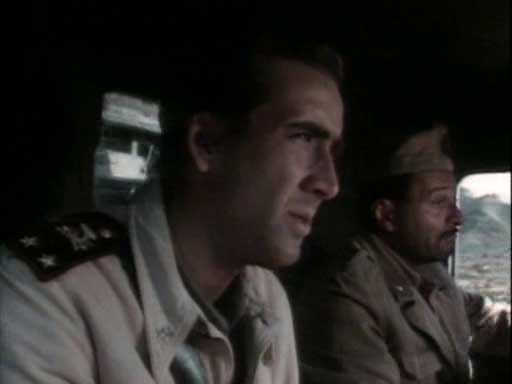 And that’s the first problem with the adaptation: this act comes from out of nowhere in the movie, and isn’t even vital to the plot. Much of the conflict in the film’s second half comes from the worry that Silvestri caught leprosy from this woman. Why did it need to be a rape? Especially considering the other main adaptation problem: within two minutes of being raped by Silvestri, this woman seemingly falls in love with him.

I didn’t read the book this movie is based on, and I don’t plan to. But it’s this sequence of events that really makes me wonder what’s happening in the book at this point. Before Silvestri encounters this woman, his only motivation in the film is to find his army squad’s dentist, so he can get a tooth extracted. He heads to a few places where the dentist supposedly is, but always seems to be missing him. He’s ultimately sent on a “shortcut” to meet up with the dentist, and it’s on this path that he meets the woman. But that’s not before Silvestri encounters a lizard in the jungle, whom Cage picks up to put a lit cigarette in his mouth. He then sets the lizard back down, who walks away smoking. This is probably the coolest lizard in the history of cinema. 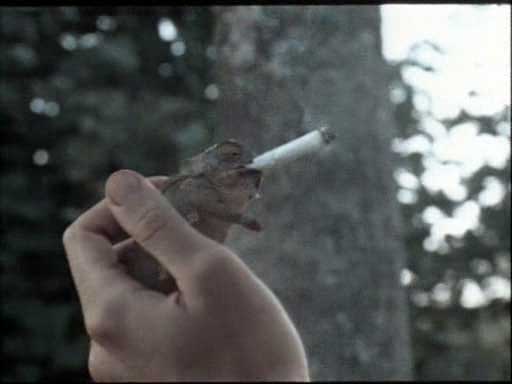 Shortly after giving the lizard a cigarette, he encounters the Ethiopian woman bathing in a pond. She speaks no English (she’s apparently the only person in Ethiopia who doesn’t speak English, since everyone else did), and all Cage wants to do is find a lake that’s a landmark on his “shortcut” to find the dentist. He takes his shirt off (because of course he does; this is another Cagenection) and tries to convey what he means through body language. 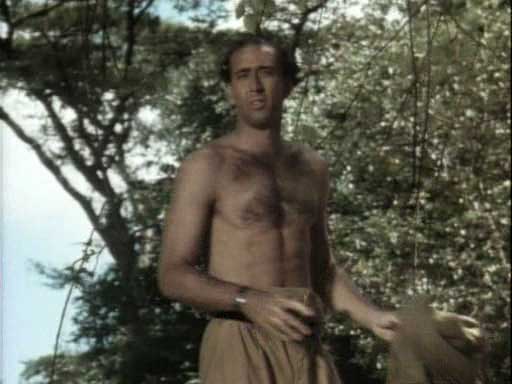 The woman gets out of the water and seems relatively pleasant, but then Cage forces himself upon her. It’s too abrupt, and nothing about the characterization of Silvestri up to this point suggests he’s capable of such a brutal act of violence. Looking at this film on a larger scale, you could make the argument that it’s a condemnation of the inherent sense of power and authority people in the military feel when they’re in another country. More likely, though, is the possibility that the screenplay is just a poor adaptation of the novel, and we missed a lot of beats along the way.

Look, I know how hard it is to adapt a 300 page book into a 2 hour movie. It just can’t work. When films come close, it’s cause for celebration. But it’s examples like Time to Kill that make me wish the screenwriter had told a slightly different story than the one in the book, and took the time to connect the dots. It’s hard to follow a storyline where a woman is raped, and then the next scene shows her and her rapist literally sharing a picnic lunch. 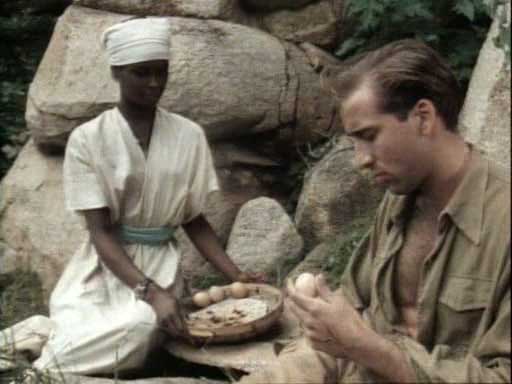 It’s at this picnic lunch, though, that we get another one of my favorite little scenes. Cage needs to find that lake so that he can get back on the right path to finding that dentist. He draws for his (apparently) new girlfriend a “lake”: 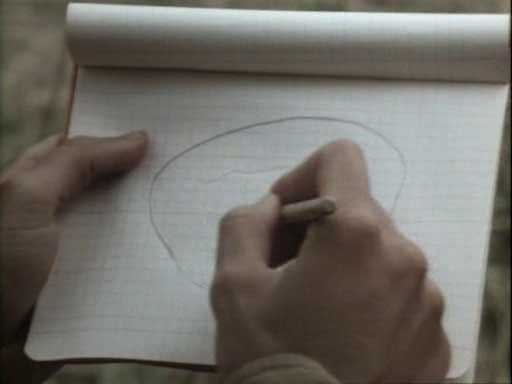 She doesn’t know what it is. Obviously. This is the worst drawing ever. He then draws a crocodile in the lake, and his girlfriend FREAKS. OUT. She knows exactly what he means, and she brings him to the lake. It’s weird that such a horrific event was bookended by a smoking lizard and a laugh-out-loud moment at the worst sketch in the history of drawings, but maybe that’s the point? Maybe the screenwriter wanted to soften the blow? Whatever the reason, it doesn’t make much sense in terms of tone.

Back on the right path, the two camp out in a cave overnight… and have consensual sex. This is what drives me crazy. This scene makes the entire rape scene meaningless, considering the actual rape has no repercussions throughout the rest of the film. Why couldn’t Cage have just fallen in love with this bathing girl, then had sex with her in the cave, and that’s when he thought he caught leprosy? The necessity of rape makes no sense, other than to add shock value to an otherwise boring film. I can’t help but wonder how the book handled this portion, because the film did a lousy job of it. 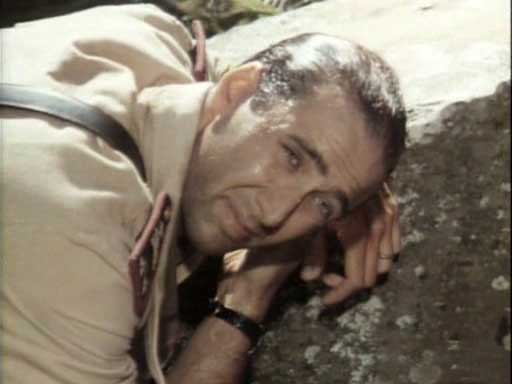 After he compromises her, a couple of hyenas show up at the cave. In an effort to defend them, Cage fires a couple of shots their way. The hyenas run off, but his girlfriend is struck in the stomach and begins to bleed out. Cage mercy kills her with a bullet to the brain, and she’s gone. (What a character arc, huh?)

As sloppy and ill-fitting as the first half of this film was, it almost makes more sense than the second half. Soon, the construction site is overrun, and just about everyone Cage has come into contact with up to this point in the movie has wound up dead. All he wants to do is get home to his wife (oh yeah, he’s married) in Italy, so he requests a furlough and has it granted. His relief, though, is short-lived, as this is when he first thinks he may have leprosy. The rest of the film is him trying to figure out whether or not he has leprosy, and how to deal with it if he does. 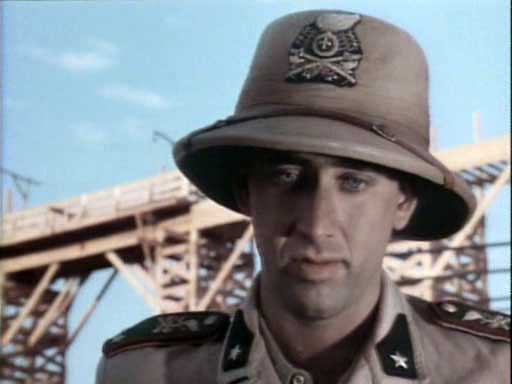 Spoiler alert: he doesn’t have leprosy. Once he finds out he’s free and clear, he goes home to Italy and the movie ends. 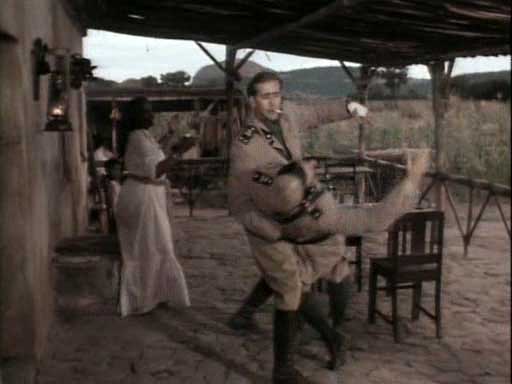 I’m skipping a few steps here, but not too many. This screenplay is riddled with holes, and is a clear example of why not all books should become movies. There’s a good chance this could have been a great movie, as it’s anchored by a terrific performance by Cage. But instead, there’s never a sense of cohesiveness and the story seems to skip a lot of (what seems like they’d be) helpful points. 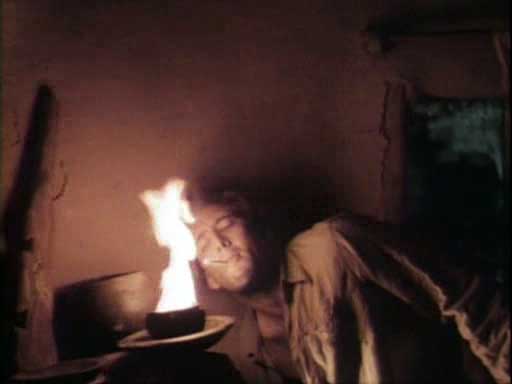 This probably isn’t the last Cage movie that’s adapted from a novel. Let’s hope the next one is better! 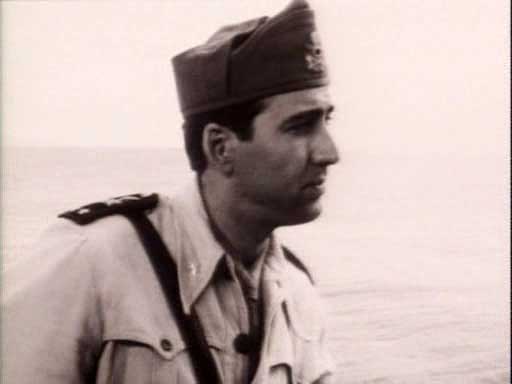 How can I watch it? I don’t recommend watching this movie; there are better things Cage is in that shows off the same kind of talent and range. If you’re a hardcore fan of Ethiopia in the 1930s, though, you’ll have to scour eBay for a copy of this one. It was never released in the U.S., from what I can tell.

What’s up next? You guys, we made it — it’s time for my other favorite Cage movie, WILD AT HEART. Go watch this and thank me later. (We’re also going to talk about INDUSTRIAL SYMPHONY NO. 1, which also stars Cage and was also directed by David Lynch in 1990, the same year as Wild at Heart.)