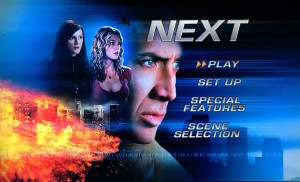 Today on Cage Club we can see two minutes into the future in NEXT. This is Cage’s first film in the science fiction genre and I am kinda surprised it took this long to get here. There are a few genre that we still have not seen Cage in besides science fiction, like a western or musical, but he will return to science fiction soon enough with Knowing. NEXT is an adaptation of a Phillip K. Dick novella that I have not read, but if it’s Phillip K. Dick then it’s bound to be some hard core science fiction.  Dick’s works have been adapted into numerous films including Total Recall and Minority Report, but most of the time they are drastically different than the source material. From what I’ve been told about the original story for NEXT, which is called “The Golden Man”, it seems like this movie only takes the general concept of a man who can see two minutes into his own future and runs with it in a completely new and original direction. While I did have some issues with the movie, none of them truly came in the way of enjoying this film for what it is.

Cage plays a Vegas Magician named Frank Cadillac, or is it Cris Johnson ? He has two names because he’s actually in hiding, but he hides in plain sight in the form of a lousy lounge act. Frank makes a meager living using his powers to be a run of the mill magician and from time to time he will gamble, but nothing too big and nothing that will get him noticed. Frank does get noticed though when he attempts to stop a casino robbery after seeing it happen two minutes in the future. This leads to a cool scene where Frank simply walks out of the casino avoiding guards and being unseen because he’s already planned the best route two minutes in the future. It also shows that using his powers draws attention to himself and that causes more problems. Frank can’t go unnoticed forever and soon the F.B.I. comes knocking in the from of Julianne Moore. She wants Cage’s help to find a Nuke that has been planted in California, but Cage doesn’t want to hear it. He knows that using his powers is dangerous. He also knows that based on his past encounters with the law, it won’t stop at this one mission and the F.B.I. will probably keep him against his will for as long as they want to predict the future. Cage instead uses his gift to hit on Jessica Biel and forge a romanic relationship instead of finding the Nuke with the feds. The time is well spent, but soon Cage is captured after a cool chase scene and subjected testing. Turns out Jessica Biel will be kidnaped and used to confuse Cage  by predicting her death instead of the bomb going off. They rescue the girl, but don’t stop the bomb from going off and everyone is killed. Then Cage flashes back to halfway in the movie when he’s in bed with Jessica Biel and we learn the whole thing has been one super long premonition about the future. It appears the the girl helped to stretch or extend Cage’s power beyond 2 minutes so he could try to find where the bomb was going to go off. He decides to help the F.B.I. and not get involved with the girl, or else it will keep him from finding the bomb and put everyone in jeopardy. The real mission starts just as the credits start to roll and my head kinda hurts after all of this.

This may be one of those few Cage movies that I am not the biggest fan of. I think most of the film works, like the acting and the directing and the general premise of being able to see and change the future. What I didn’t really like was the pace and some of the story points along the way. I also had trouble pin pointing how Frank’s powers work because we see several different ways his ability manifests. First it seems like he experiences the event then travels back in time to stop it. Other times he seems to be looking into the future to see what’s going to happen. Another time Frank splits himself into multiple versions of himself at the same time and sees multiple futures at the same time, then determine what course to take and collapses the other possibilities into one. That is my favorite way to show his powers and with they set it up that way earlier and didn’t wait until about the last time he uses his powers to show it. What we see is Frank split into multiple versions and experience every possible outcome two minutes in the future, and when he finds the path that works he collapses back into himself. What I like about this is it shows Frank experiencing each possibility all at once instead of one at a time. It tells me that Frank doesn’t need to see the future over and over again to escape a situation, he sees all outcomes at the same time. This is touch to convey on screen, like the scene when he tries to pick up Jessica Biel. We see him crash and burn over and over again but in his reality it’s all happening at the same time. I like that concept and wish it was clearer early on in the movie.

NEXT time on Cage Club we have our very first official sequel to a Cage film with National Treasure : Book Of Secrets. Ben, Abby and the whole gang are back, this time with some new faces too. It’s little more than a retread of the first movie, only this time they go international. So I guess it’s more like International Treasure. And there may be more than one book involved, so I guess it’s more like “Books” of Secrets. I enjoyed the first National Treasure, even if it was an modern day Indiana Jones clone. It won me over in the end and I look forward to seeing what amazing new clues lead to some amazing old treasure.