The movie business is a tricky business. Throughout the course of #CageClub, we’ve tracked Nicolas Cage’s ascension from TV actor to bit part to supporting role to bonafide Hollywood leading man. It’s kind of the natural progression of things, right? Generally speaking, actors begin their careers on TV (or even in commercials), then work their way up to bit parts. Good actors will then become supporting roles, and many will stay here and find a comfortable living (like Character Actress Margo Martindale). For a very select few, this rise continues all the way to leading role, where they tend to stay unless they make some really bad decisions. 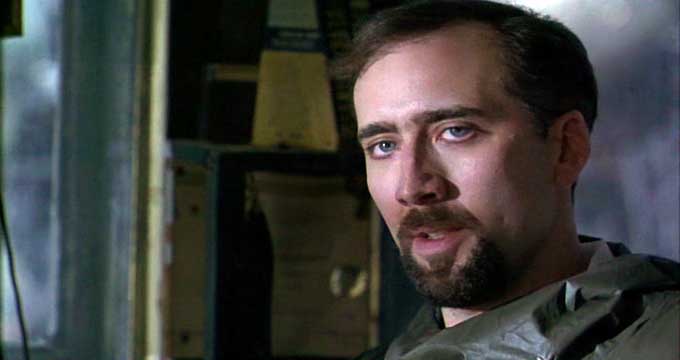 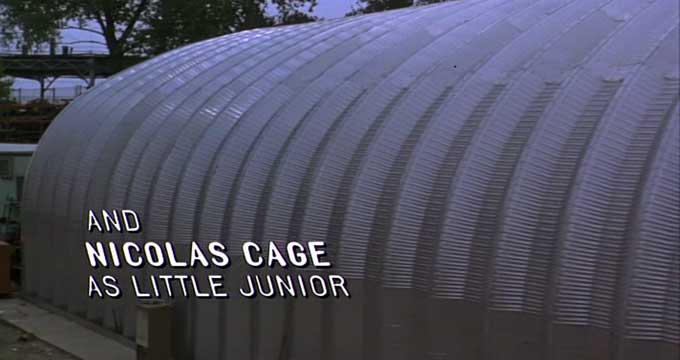 We’ve all seen countless movie openings! We know there’s a big name coming, but they’re not at the top of the list. Where could they be? At the end, of course! These honors are usually saved for big actors in smaller parts. It’s, in a weird sense, a lack of respect to just throw a big time actor in the middle of a long list of actors. You could go the alphabetical route (which this film actually does once it lists the top-billed David Caruso), but even then it’s weird. So what do you do instead? Toss ’em at the end! 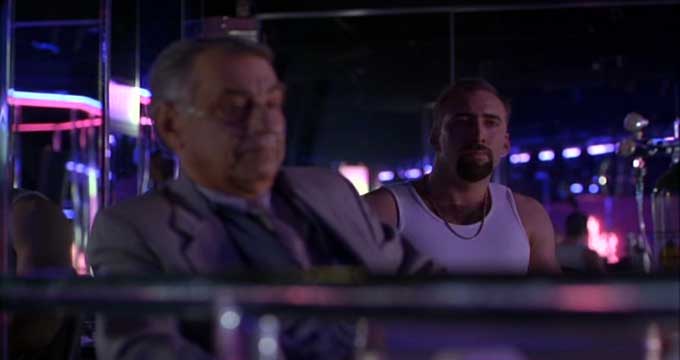 While Cage isn’t the male lead in this movie — that honor goes to David Caruso (of NYPD Blue and CSI: Miami!), who also got the “honor” of a Razzie nomination for Worst New Star — he makes every minute that he’s on screen count. KISS OF DEATH isn’t a great movie; it’s the kind of movie that gives a character an Achilles heel like the need for an inhaler, and then never have that bit pay off in any meaningful way. What’s that, you say? That’s exactly Little Junior’s flaw? You don’t say! 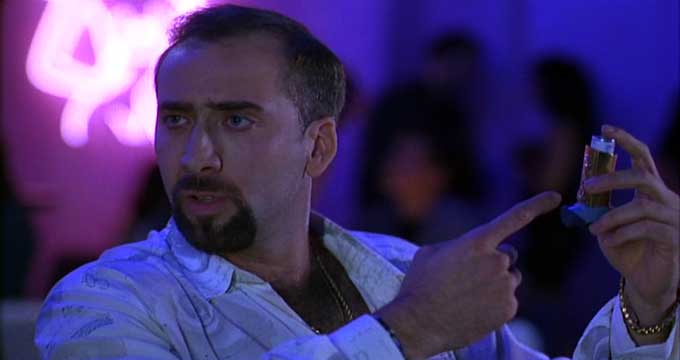 Like several other movies he’s been in, Cage is an absolute whirlwind of intensity in this film. He enters the film by grabbing Michael Rapaport by the throat, and never really lets up. He tosses a drunkard from a truck before helping execute a mob deal-gone-wrong. He then disappears from the movie for a while while Michael Rapaport acts like a total buffoon, only to re-appear a few scenes later bench-pressing a stripper 40 times in a row. WHAT! This is the BEST. 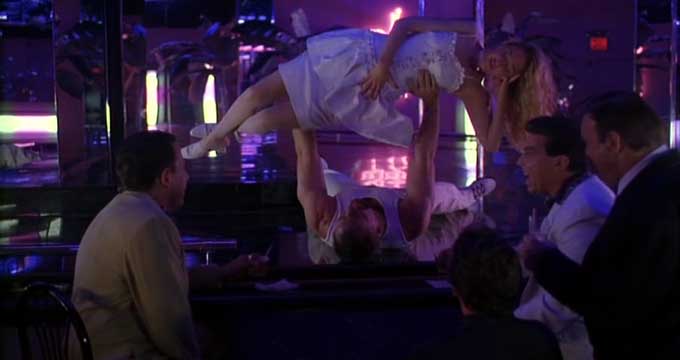 Much of the movie takes place in a strip club called Baby Cakes. (A great name, to be sure.) It’s kind of the Badabing in the Kiss of Death world, and Philip Baker Hall is its Tony Soprano. Hall is “Big Junior,” Cage’s father, and midway through this movie, he dies. We learn this in the best way; let me summarize what the closed captions say for this scene:

Cage then grabs a patron at the strip club, yells, “MY DAD IS DEAD!”, then lets him go. Come on. This is GREAT. 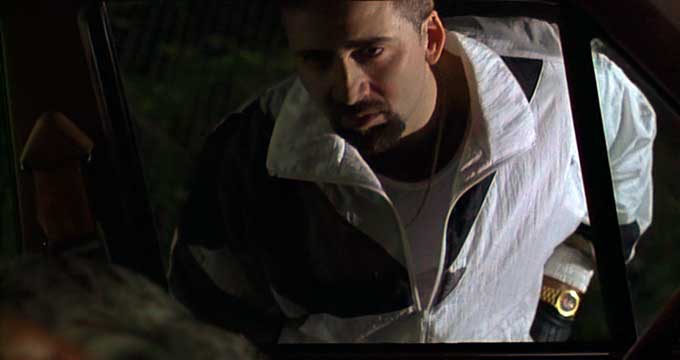 But before Big Junior dies, he tells Little Junior to “take care” of Michael Rapaport in the mafia sense. For the second movie so far in #CageClub, Cage literally beats a man to death with his bare hands. Unlike in WILD AT HEART, though, Cage doesn’t go to jail (at least, not now) and instead continues his asthmatic-ridden ascension up this mafia ladder. 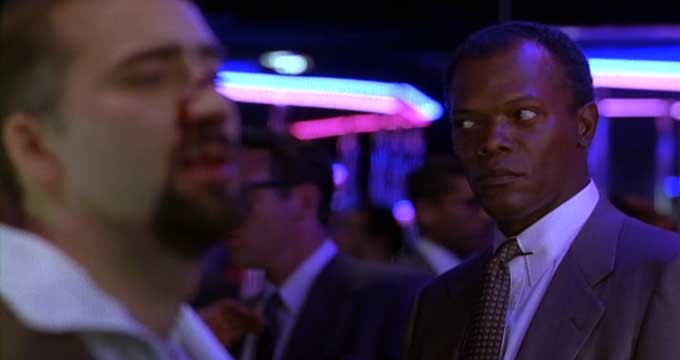 Cage isn’t in the film for a while; we waste a lot of time on stupid David Caruso. But when Cage returns, he comes back in a big way. We learn of his acronym mantra (you know, “letters that stand for things”); it’s “BAD: Balls. Attitude. Direction.” Not too long later, he straight-up murders a main character, sort of just because he can, and sort of because “you don’t know who you can trust.” 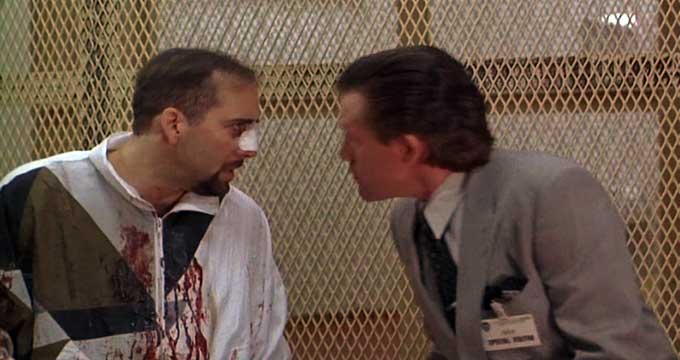 Ultimately, Cage faces his downfall, but not before he has a lot of fun in this movie. The DVD case for Kiss of Death says it’s “the best crime film since GOODFELLAS,” which is almost certainly not true. It’s not great, and David Caruso is a bonafide buzzkill in the lead, and every bit deserving of that Razzie nomination. But like a lot of other middling Cage films, his time on screen is electric, and it almost makes up for the rest of the film. 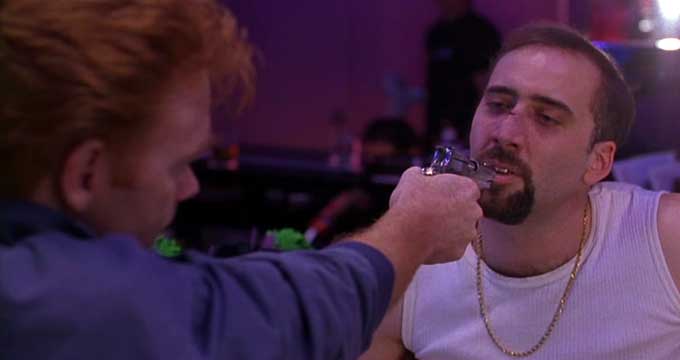 How can I watch it? It’s on Netflix! That’s a change of pace.

What’s up next? It’s time for Leaving Las Vegas, the movie that earned Cage an Academy Award. Watch this one before you read our reviews/listen to the podcast. Trust me; it’s outstanding.