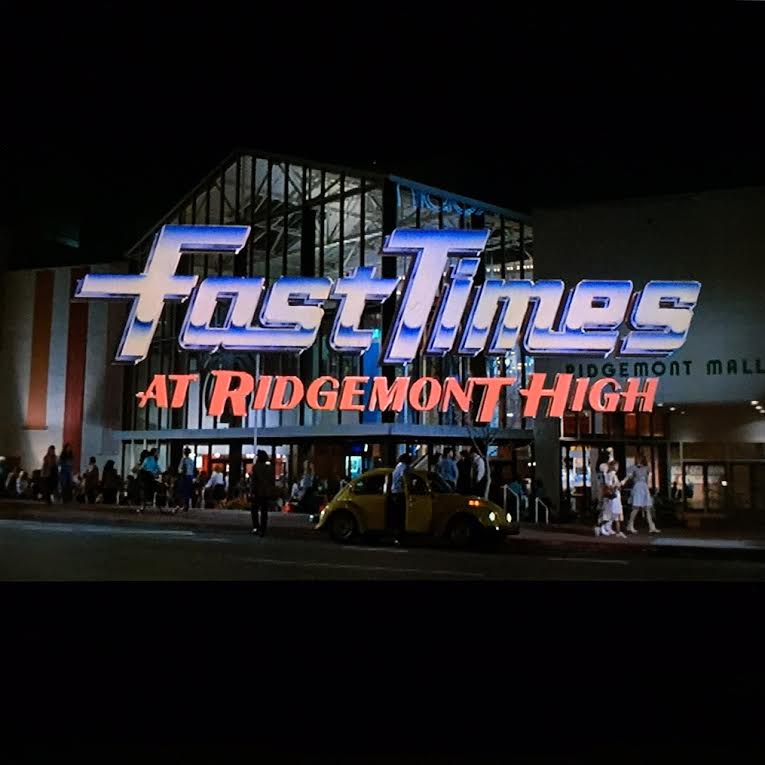 For out second entry in the club we tread more familiar water with Fast Times at Ridgemont High. This is a seminal movie about American high school life written by Cameron Crowe and based on his novel of the same name. Crowe went undercover as a Senior for a year and assimilated himself into the lives of the students he then used for the basis of the characters in this film. You may be thinking, is Nic Cage in that movie? Sure, there are a lot of young actors that went on to have long and successful careers but was Nic Cage among them ? You better believe it. In his smallest role to date as “Brad’s Bud” Nic Cage is woven into the tapestry of “Fast Times” adding to the colorful cast of background students that inhabit Ridgemont High.

Will the real Brad please stand up ? It seemed strange to me that Nic Cage was relegated to non-speaking background character, especially after his break out performance in “The Best of Times.” Sure, that movie wasn’t great, but Nic had charisma and showed great potential. ( Technically he does have one line in “Fast Times” but it’s almost harder to hear than he is to spot ) I had to go into my Ben Gates mode again to try and decipher his appearance in this film. I watched this movie paying close attention to the background in search for Cage to further explain his character’s presence. Joey’s wonderful post outlines the 7 shots that Cage appears in, but something else was gnawing at me about his character. Much like Spicoli, Brad has his lookalike henchmen that form the crew who tag along after him. Cage plays one of these “buds” of Brad, portrayed in the movie by Judge Reinhold. He is seen orbiting Brad the entire movie weather they are hanging out in the the parking lot or working together at All American Burger. In the school registration scene Brad and Cage are talking to each other before Arnold interrupts and it appears as if Brad is looking into a mirror as Nic Cage is dressed just like him ! Something is up here. My mind started to race developing a theory to justify his appearance but to no avail. Thankfully with the advent of DVD’s the average person is privy to trade secrets in the form of behind the scenes features and Director’s commentary tracks to help go beyond the movie and discover the whole story.

In behind the scenes interviews, Director Amy Heckerling and the casting director reveal a few great nuggets of information regarding events transpiring up to the start of the shoot. Casting came down to the wire in many instances but none so close as the character Brad. Before Judge Reinhold was cast in the role it belonged to none other than Nicolas Cage ! That is right, Cage was supposed to play Brad, the most popular boy in school and male lead of the film. So what happened? Why didn’t Cage play Brad and change the face of film history ? Turns out Nic Cage was only 17 at the time of filming and could not legally work the late hours the role required. That is right, Cage was still a teenager and by law could not play Brad. Quite the revelation. Everything started falling into place. They couldn’t cast Cage in the lead so they offer him the role of Brad’s Bud as a sort of consolation prize allowing him access to the set and insight into proper filmmaking. KA-BOOM, Mind Blown! What insane tangent timeline would have existed if Cage played Brad? Would he go on to chase bad guys in Beverly Hills with Eddie Murphy or get locked in a bank vault in Gremlins? I’m not saying he’d have Judge Reinhold’s exact career but it’s fun to wonder. Next time I screen “Fast Times”  I’ll be mentally  projecting Nic Cage into the role of Brad. Sorry Judge but now it’s Nic Cage driving the Cruising Vessel, masturbating to Phoebe Cates in a pirate outfit, being “cock of the walk” in school and thwarting a convenience store hold up. On some parallel earth somewhere, in an episode of FRINGE, there’s a version of Joey and myself watching that movie right now.

In conclusion I believe you should watch Fast Times at Ridgemont High and play Cagespotting for yourself. He goes by quick in the seven shots of the movie that he is in so you gotta stay alert! I’m not even joking about how fast he goes by some shots. Joey and myself had to combine forces and compare notes to make sure we saw all of him there was. I bet he isn’t even visible in some shots depending if you;re watching the Widescreen or Full Screen version. ( always be watching Widescreen ) Next up, no more second fiddle for Nic Cage. Prepare yourself to explore social boundaries, face peer pressures and try to follow your heart. It’s time for Nic Cage in his first leading role with Valley Girl.