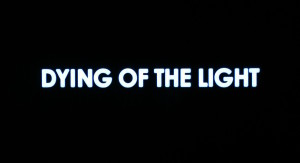 Today on Cage Club we prove an old man still has some use in Dying of the Light. Cage teams up with returning writer Paul Schrader for his Cage Club directorial debut, this time about the ravages of age, the cruelty of memory and the need to be useful, in this elder spy thriller. This is also our second movie that has changed titles late in production, like Tokarev was changed to Rage. This movie was originally called In the Dying Light, which isn’t that different and makes the same about of sense, so the meaning isn’t lost or drastically altered by the renaming, unlike Rage/Tokarev. Turns out there were lots more problems in post production that changed the tone and style of this movie from the more abstract towards the more average, traditional type of film. The best part of this movie is seeing old man Cage. It’s a first for him playing a character beyond his years, and with some subtle make up I believe he pulls it off.

Cage plays Evan Lake, an aging CIA agent. 22 years ago he was rescued form being tortured by a terrorist named Banir and he’s been haunted by the memory ever since. Evan wants desperately to get back in the field but his superiors think he is too old and are trying to force retirement on him. It’s even harder for Evan when he discover that he is suffering from a brain disorder that’s causing him to lose his memory. With the help of young agent Milton, played by Anton Yelchin, Evan tracks down the whereabouts of the supposedly dead Banir, giving Evan purpose in his final days. Now it’s a game of race the clock as Evan and Milton try to track down Banir before Evan dies of his brain disorder. The CIA top brass isn’t having any of this from the two agents and sideline Evan, making him retire, but not before Evan resigns by giving an impassioned speech about just how screwed up the system has become.

Evan and Milton travel half way around the world to impersonate a doctor that Banir has summoned to his safe house because he too is dying from a disease, but unlike Cage’s disease that attacks his mind and leaves his body intact, Banir has lost the use of his body while retaining his criminally brilliant mind. Evan comes face to face with the ghost of his past and can’t pull the trigger, leaving Banir to his own devices, which includes putting a hit on Evan. Evan’s disease combined with his PTSD of the torture incident leaves him almost paralyzed and maybe that is why he ultimately can’t do the deed at first. The syndromes of his disease certainly have been causing problems on his mission and it’s a miracle he gets as far as he does. Evan realizes he really should have killed banner when he had the chance and after he survives the attack poolside at the hotel, he promptly goes back to the safe house and kills Banir with his bare hands. Evan then turns his car into oncoming traffic, committing suicide after having completed his life’s work.

This film is okay but there is nothing that really makes it stand out and original beyond an average political spy thriller. Yes, the themes are really strong and I liked what they did there, but there was just a lack of style in the film making, and there felt like room to do more there, especially regarding Cage’s character and the way he perceives the world now that he is aware of his brain condition. It turns out that part of the original intent when making this movie was to do just that, show the story from Cage’s perspective using film language to enhance your view from inside his head, but in post production the film was taken away from the editor and director by the producer and cut to be a more traditional version of what could have been. You can see some of what the director’s original vision was in the deleted scenes. There are strange angles and a very heavy use of color in different parts of the movie to create a certain feeling. There was an attempt and vision to make this more abstract and I think it would have helped greatly in setting this apart from the average, run of the mill, type of movie making.

That will do it for Dying of the Light ! Next up on Cage Club we got the politically charged thriller, maybe (?), The Runner. I know it has to do with the BP oil spill from a few years back, and that it takes place in New Orleans !!! The Saga Continues next time on Cage Club when we find out what Cage is running from, or towards.