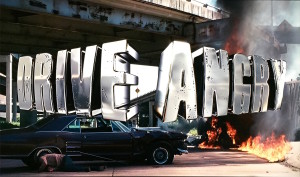 Today on Cage Club we escape from hell to rescue our baby grand daughter from a crazy cult leader in Drive Angry !!! Cage is back in 3D again, but this time it’s live action, really hard R rated and completely off the fucking chain !!! This movie is pure modern exploitation film making from the excessive sex and violence to the over the top 3D designed cinematography, Drive Angry knows you are here just to have a fun night at the Drive-In.

Cage plays Milton ( Paradise Lost ) a mysterious man in black that is searching for his grand daughter and won’t stop until he finds her. Nothing is know about him for a long time, just that he is a certified bad ass. Milton is actually dead. He was a criminal that died and went to hell but has now come back to walk the Earth to take care of his mission, much to the chagrin of the Devil. He stole a cool car and the “God Killer” gun to assist him on his mission, but that isn’t enough. He also recruits newly unemployed waitress and newly single bad ass Piper to help him on his mission. She is pretty much the female equivalent to Milton, except she is a female and not back from the dead. Together they drive angry across the Southern American states to track a crazy Cult Leader, Jonah King. King is a wanna be Manson/Jim Jones type figure and the one that kidnapped Milton’s grand daughter. Seems after Milton died his daughter fell in with King but couldn’t get free before he caught cup with her, killed her and took the baby to sacrifice in Satan’s honor, hopefully bringing hell to Earth under King’s control. As if this weren’t enough, Hell has sent it’s best man after Milton, The Accountant. He is a supernatural entity responsible for keeping account of all Hell’s prisoners. He ventures to Earth ( for the first time ? ) and tracks Milton thru his path of destruction. He wants to take Milton back to Hell, but thru the course of the story gains sympathy for his plight and actually lends him a hand now and again. His reasoning is that Milton will come back to Hell one way or another so why not help Milton do something really bad ass first, and what is more bad ass for a servant of Satan than keeping some Human from raising his undead army? By the end, Milton is successful in killing everyone in the Cult including King, only he uses the mystical “God Killer” on King to ensure his soul is destroyed and doesn’t gain admittance into any type of afterlife. Milton makes Piper the baby’s new guardian then joins The Accountant for a beer drank fro the skull of Jonah King. It’s truly bad ass. Milton then surrenders to The Accountant and they enjoy a road trip back across the Highway to Hell, with Milton satisfied that he saved his grand daughter and that she will be in safe hands. Everyone lives happily ever after ?

This movie also brings us our first true blue female action star with Amber Heard. Her character kicks major ass. She is mostly written just like you would a male action hero, much like Cage in this movie. In fact they serve well as mirror images of each other, only with different genders. It was just very refreshing to see this in Cage Club after all the weak or under written female characters we have come across.

This was an over the top adrenaline fueled action comedy, if you ask me. I would recommend this if movie a lot for the type of film it is, it’s not high art and it knows it, but it does have Nic Cage drinking beer out of a human skull and I don’t any other movie in existence that has this imagery in it so for that alone ( which comes at the very end ) I’d say is worth sitting thru the whole movie to catch.

That should do it for Drive Angry. Next up on Cage Club, despite what I thought, we still have not reached direct to DVD status as we find out just what the “hungry rabbit” likes to do when we watch Seeking Justice. It’s yet another conspiracy here on Cage Club but unlike Snake Eyes there are way more than just 5 people making up this one. We find out just who is seeking justice and what that means next time !!!