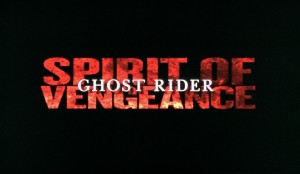 Today on Cage Club we welcome the return of the Rider with Ghost Rider : Spirit of Vengeance. This is only the second sequel that Cage has done and I may have to concede is to be the better of his two sequels. National Treasure: Book of Secrets felt almost like a remake of the first National Treasure where as this film is more of a reboot than remake or proper sequel. Whatever they decided to do with this movie payed off for the most part. While it’s not amazing or the greatest Comic book story that we have gotten, this movie does have some of my favorite comic book imagery come to life on the big screen. The story is thin, but enough, especially when coupled with the amazing imagery on screen and the acting stylings of Nic Cage who returns as the Rider.

When we last saw Ghost Rider he was flipping off the Devil and keeping his powers so he could help mankind with his curse. He had said goodbye to his darling Eva Mendes and blazed a trail of fire across the country fighting for good. Or so we thought. When this movie opens, they set the record straight right away. This is not a direct sequel, it’s more like a soft reboot. Up front we get a remake origin story in comic book animation. The big change they make to the origin story is that instead of accidentally signing the deal with the devil and being more reluctant about it, this time it’s made very clear that Johnny wanted to make the deal to save his dad. We find Johnny hiding out in Romania or somewhere around that part of Europe. He’s running from his curse and not using it to solve crimes or be heroic, he wants a cure. He hooks up with an awesome drunk French priest named Moreau who proposes a deal, help him find the devil’s son, Danny, and transport him to a Monastery so they can stop the end of the world and he will cure Johnny of the Rider curse for good. Johnny agrees and they find the boy and bring him to the Monastery, much like the plot of Season of the Witch, all the while being pursued by The Devil and his Goon that makes everything he touches decay. Moreau also tells Johnny the origin of the Demon that makes him the Rider. It was once an Angel of Justice named Zarathos that fell to Earth and was corrupted by Hell then controlled by The Devil and turned into the Spirit of Vengeance. Johnny wonders if somewhere inside the Angel might still be there.

Like many sequel superhero movies, Johnny loses his powers. When he delivers the boy to the Monks they strip the demon from his body ( somehow ) at the worst possible time. The Decay Demon has killed all the monks and taken the boy to his Dad, the Devil, so that the Devil can inhabit a mortal vessel and keep all his otherworldly powers. Johnny and Moreau team up without any powers, along with the Boy’s Mom, to take down the Devil and his army, save the boy and stop Armageddon. Johnny breaks up the party rite as the ceremony is commencing and starts getting his ass kicked. Then, the Devil’s son tricks his Dad by saying he wants to kill Johnny himself, but really he vomits lava into Johnny’s mouth which causes him to regain his powers, possibly stronger than ever. This all leads into the climatic daytime chase between the Ghost Rider and the Devil. This is what I was waiting two movies to see, the Rider in daylight, and he looks amazing. The whole look of the Rider in this film is revamped and for the better. He feels much more real and tactile, his jacket melts around him nd smoke billows from his flaming skull head, which is charred and blackened from being burned all the time. It’s just awe inspiring and a joy to watch over and over. What else is cool is the fight between Ghost Rider and Decay Man on top of a car hood. They have a full on supernatural-superhero fist fight on top of the car at high speeds. One other great thing they did with Ghost Rider in this version was give him new powers so at certain moments he can change whatever he drives into a “Flaming Ghost” version of that vehicle and not just his classic motorcycle. Early on he transforms some heavy excavating machinery to kick ass and now at the end he turns a car on fire and uses that. At the end he finally drives the Devil off the road and lasso’s him with his chain, swings him into the air and smashes him down on the ground so hard it send him back to Hell !!! The one problem is that Danny has died, killed in the car crash, but then Johnny summons the Angel inside him,  the Spirit of Justice and this red flame burns blue allowing him to revive the Boy. Johnny rides off into the uncertain future, burning a bright blue flame, as credits roll.

That will do it for Ghost Rider 2 !!! I don’t think we will ever get a third and if we do I doubt that Cage will be playing Johnny Blaze again. It was a good run while it lasted and to be honest I never thought we’d get this second one, but I am so glad we did because I think it’s actually the better of the two movies. Next up on Cage Club we still haven’t gotten to direct to DVD yet, almost, but not yet. We are back in New Orleans and have a returning director again when we try to save our estranged daughter from our estranged criminal partner in Stolen !!!